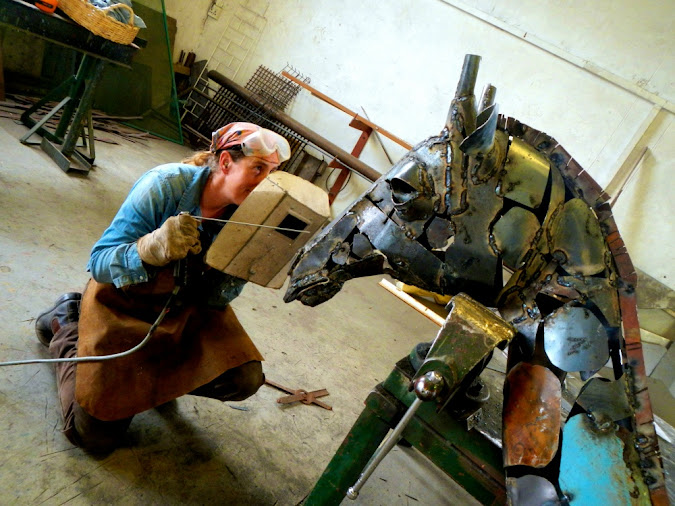 A Travelling Artist Can Do Almost Anything

While traveling around the world with her welder in hand, and sketchbook in the other, Christina can accomplish many things in a short amount of time. In 2020/2019 Christina taught art courses at the Lycée de Metiers D'Art in Coarraze, France.

She created many  life size red deer, and will exhibited them at hotels and events later in 2019.She exhibited the sculptures in a private gallery in Pau, France from February-July 2020 and had several events linked to the exhibit.

​July 2019 Christina won first prize and public vote prize at the sculpture competition in Salies de Bearn, France. During four days 15 artists created sculptures from scrap steel that was provided by the town. They voted Christina's wild boar as the best in the show!

In 2018 Christina created artwork in her studio in France, and  participated in a collective show in October 2018. A leaping dog sculpture was displayed in Oak Bay, near Victoria BC starting in May 2018. It was exhibited as part of the Arts Alive juried sculpture competition.

She recently had a solo show in Pau, France Dec 18-24, 2017, based on her many voyages to Morocco.  She worked in the Brackendale Art Gallery studios creating a series of salmon bike racks of the new condos on the waterfront in Squamish, BC. She completed a public art commission for the town of Squamish, BC in Nov. 2016.  In 2015 she spent the year preparing for a big art show in Nay, France, at a contemporary art centre called La Minoterie. She created a total of 17 running roe deer sculptures, and the same number of swimming salmon. These were displayed at the art gallery and she received media interest in the form of newspaper articles, television interviews, and radio announcements. The show was a great success and many deer found new homes, some on the Atlantic Coast, others near Paris, and even more in the Dordogne.

Earlier, In December 2014 she visited Otjiwarongo, Namibia and created a 6 meter tall giraffe for display and sale at an animal research centre she was involved with in the past. The hope is that the sculpture, while being prominently displayed outside the centre, will attract people to come and experience the important work being done on rare and endangered species in Namibia.

In September 2013, Christina traveled to a horse ranch South West of Budapest, Hungary. There she sketched daily and welded a life size horse that was eventually displayed at an art show with other artists. This thereby enriched the arts and culture of the region, bringing people from outlying areas to see the various artworks and meet the artists on site.

Both of these projects in 2013 were exciting on site installations that led to new contacts, new ideas, and future projects.

In 2014, Christina traveled again, this time to the Bonavista Penninsula, where she created a life size moose sculpture. Working on site in a temporary tent placed on the property of Fisher's Loft Inn, in Port Rexton, Christina completed the piece in a few weeks. The sculpture can now be seen in a central  place on the property, overlooking the shoreline and the ocean nearby. Television coverage and several radio interviews resulted in some great national exposure.

While Christina works on new artwork through the year 2020, she will spend time in the field drawing in her sketchbooks, all the while writing observations and collecting impressions of the things around her. She has a strong sense of connection with the natural world, which is reflected in all of her artworks.

Check out her art portfolio at www.christinanick.com.

She also rents her monumental welded steel sculptures for events, marriages, parties...try it out! Contact her on her message board and she will contact you very quickly. You can also send her an email at artbycnick@gmail.com directly.

Send her a message, she will be thrilled!

Christina Nick works in a variety of media and often travels to different countries to create sculptures and draw in her travel sketchbook. There is a definite link between her travels, the things she sees and experiences there, and what she creates.  The artwork that is the result of being abroad often create a sense of place for the viewer, and references issues in the specific countries.The way she portrays these subjects is by using the native animals of the regions to develop her ideas, through metaphor. The representational subject of her sculptures are easily recognized and therefore approachable, but more contact with the pieces brings up hidden subjects through object association.

For additional artworks created by Christina Nick please stop in at www.christinanick.com and check out what she has created over the past twenty years!

BELOW PLEASE FILL OUT THE FORM IF YOU HAVE ANY QUESTIONS OR COMMENTS ON CHRISTINA NICK'S ARTWORK< or ASK ABOUT RENTING A MONUMENTAL SCULPTURE FOT AN EVENT OR SPECIAL PARTY! SHE WOULD LOVE TO HEAR FROM YOU!

ALL RIGHTS FOR THE PHOTOES RESERVED TO PHOTOSTREAM C Nick .